The winter of 2013/14 has been low in precipitation, which begs the question whether there will be a flood this spring at all. Looking back in history, I analysed the data from the Riisa water gauge, located on Soomaa’s Halliste River, sent to my by the Estonian Weather Services (EMHI). I found that actually there had not been a single spring in Soomaa without a flood. This claim holds for the entire 89 years, during which the gauge has recorded water levels. It matters, of course, what water level is counted as flood. Although the water may rise 553 cm (as in 1931), it makes sense to set the lower limit of a flood at a water level of 150 cm at the Riisa gauge. Why? Because at that level it’s already possible to canoe across the floodplain meadows of some Soomaa rivers. When the water level rises above 150 cm, the flood spreads widely across several meadows and the water already reaches the access roads of some farms, or may even flood larger roads. For instance, like it happened during a flood in January 2014, where the water in Riisa role to 189 cm. Hundreds of hectares of floodplain were under water, and as a result of a sudden arrival of winter in the end of January, the water froze and Soomaa visitors were able to skate and kick-spark on the ice during the following month. When later the weather warmed up, with day temperatures above the freezing point, but night temperature below zero, the ice noticeably vanished. No further precipitation followed, and the sun shone, so that this year might turn into Soomaa’s record for the lowest spring water level. Until now, the lowest springtime water level has been 154 cm (in March 1975).

The 0-position on the Riisa water gauge is a hypothetical standard; this has never been reached in history. Usually, the water is lowest in summer or before the beginning of spring flood, like the lowest ever measured water level of 7 cm (in March 1942). Between rainstorms and floods, the water level normally remains low, usually between 30 and 50 cm. While I am writing these lines, the water level in Riisa is only 84 cm but it has snowed nicely for a couple of days, then it melted and water will continue to rise for few days. So let`s see how high exactly will the water rise this year?

Soomaa has on average three floods a year

Assuming a flood starts at a water level of 150 cm at the Riisa water gauge, we can distinguish several floods during the year – during the previous 20 years (i.e. for as long as the National Park exists), there have been on average three floods per year. The years 2004 and 2008 have been special, as in both of them there were seven floods! Floods thus happened during all four seasons; both years had rainy summers.

In what month is it most likely to see Soomaa flooded? Below I made a table showing how many floods happened in the months of the past 20 years.

As the table makes strikingly clear, summer floods are the rarest. Because of autumn rains, there are frequent floods both in November-December and in early winter in January. In February, they have also happened quite often, due to melting snow and sudden warm spells in the winter. Precisely because of the floods in January-February and following cooling of the water, the large ice sheets and the ice rings around trees in the forest were formed; both of these phenomena are rather characteristic for Soomaa in winter.

Of course, the usual flood time is spring – March-April. If multiple floods happen in a year, the biggest one is in spring. For the recorded series, this was the case in 75 out of 89 years. But 15 times it happened during another time: six times in January, three times in February, one time in October, three times in November, and two times in December (Figure 1).

However, within a single year, there might be several very big floods: for example in 1932, the water level reached 410 cm in January and 488 cm in April.

Figure 1. Annual maximum water level in cm at the Riisa water gauge, 1925-2013 (based on data from the Estonian Weather Service, EMHI). The green columns indicate the highest water level in spring. The top of the column has another colour if the highest water level of that year was not in spring, but in autumn (yellow) or in winter (blue). The unstable winters of the years 1989-2005 are very visible in the figure, as the snow tended to melt in mid-winter and create a large flood before spring.

In very rainy years, different floods may not even be distinguishable from one another. An extraordinary example is definitely the year 1928, which is also the rainiest year in the Estonian data series. In 1928 there was essentially one nine-month-long flood, which started in April and ended only at Christmas.

How often can we canoe in the forest?

Additionally to the flood in meadows, roads and villages, a large part of the Soomaa floodplain is deep forest. In previous years we have been able to offer canoe trips that went straight through the forests. In order to get into the forest by canoe, the water level in Riisa has to be at least 300 cm. I made a diagram (figure 2) that shows how often and for how many days such a forest trip would have been possible during the history of Riisa gauge measurements. We can see that it is not quite possible every year. The longest break has been during the years 1972-75. Often, the possibility to canoe in the forest has also been too short – only a few days in the year. 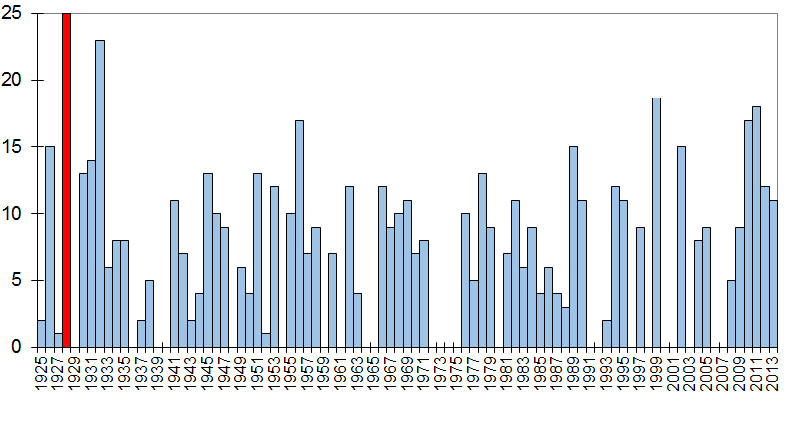 Figure 2.  Number of days in the year, when it is possible to canoe in the forest; Hallitse River water level at the Riisa water gauge at least 300 cm (based on Estonian Weather Service data).

In the figure, the above mentioned year 1928 stands out from the others; for flood fans, this could be called a dream year. In that year, it would have been possible to canoe in the forest for a whole 25 days, and not only during the spring flood, but during four different periods: the first time would have been in April (max 453 cm), the second in June in the summer (max 325 cm), the third in September (max 333 cm) and the fourth in October (max 365 cm). In the history of the National Park (1994-2013), the best years for canoeing in the forest were 1999, 2002, 2010 and 2011. The territory of Soomaa is so big, though, that it is probably possible to still find forest plots that can be traversed in a canoe also with lower water levels. And you can paddle on the flooded meadows already with considerably lower water levels.